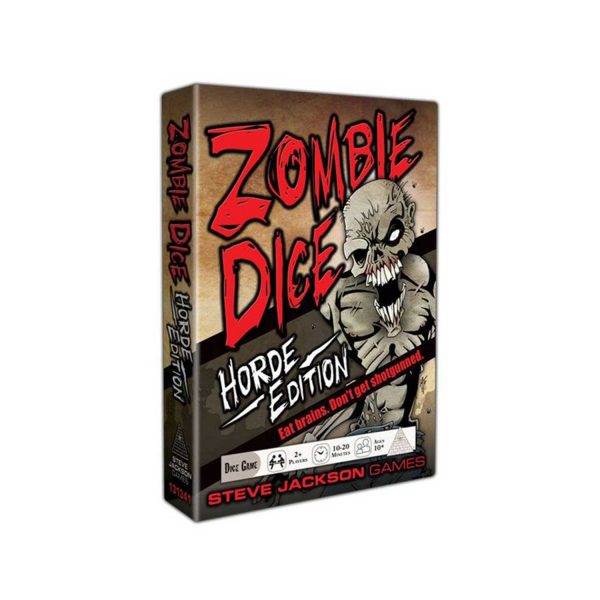 In Zombie Dice, you are a zombie. You want brains ? more brains than any of your zombie buddies. The 13 custom dice are your victims. Push your luck to eat their brains, but stop rolling before the shotgun blasts end your turn! Whoever collects 13 brains first wins. Each game takes 10 to 20 minutes and can be taught in a single round.

Each turn, you take three dice from the box and roll them. A brain symbol is worth one point at the end of the round, while footsteps allow you to reroll this particular dice. Shotgun blasts on the other hand are rather bad, cause if you collect three shotgun blasts during your turn, it is over for you and you get no points. After rolling three dice, you may decide if you want to score your current brain collection or if you want to push your luck by grabbing new dice so you have three again and roll once more.

If you love zombies, you love zombie movies . . . and Zombie Dice! So here it is Zombie Dice 2 ? Double Feature! Three new dice give you three new ways to play. For the Big Summer Action Movie, you’ve got the Hunk and the Hottie. He’s got a double-shotgun icon, but if you eat his brain, you score double. The Hottie has two shotguns and three feet icons, making her fast AND dangerous. For Santa Claus Meets the Zombies, you guessed it: Santa Claus is coming to town! He has three special gift icons: a helmet, an energy drink, and a double brain! Or, of course, you could eat Santa’s brain. It’s a very merry undead Christmas! Finally, in The Direct-to-Video Sequel, you use all three new dice! Watch Santa rescue the Heroes . . . Three new ways to eat brains, and they’re all in Zombie Dice 2 ? Double Feature. Description: 3×5 blister card with three dice. Related Products: It’s an expansion for Zombie Dice. For fans of dice games: Cthulhu Dice, Giant Cthulhu Dice, and Trophy Buck. For zombie fun, there?s Zombie Chibithulhu and Munchkin Zombies.