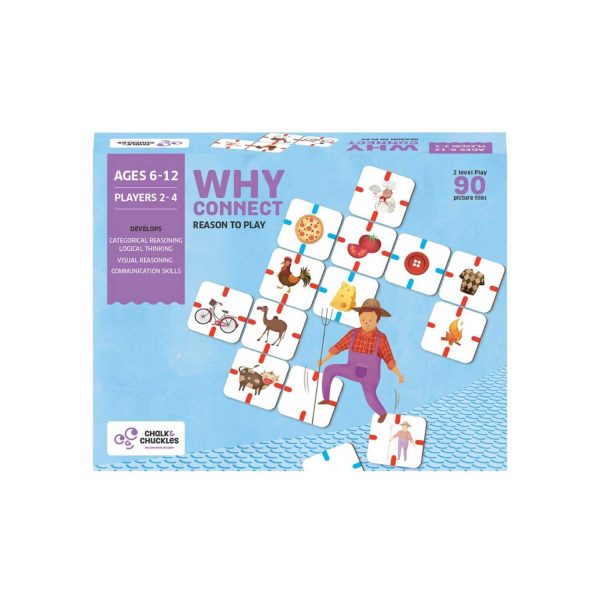 A highly addictive reasoning game that is not bound by a board and can be played anywhere on a flat surface. Players take turns adding a picture tile to the existing grid of logical connections. When adding a tile, the player must state aloud the reason for the connection (ie. “butterfly connects to airplane because both fly” or “sapling connects to chick because both are young members of their species”). The other players decide if they consider the connection logical and thus acceptable. If the players disagree with a stated connection, it cannot be played.

The more connections a tile can make when placed, the more points it is worth. A tile that connects to one tile is worth one point, connecting to two tiles is worth five points, and three or four tiles connected is worth 10 points. The tile placed must logically relate to all the tiles to which it connects. Connections can be made based on function (used for, used by), sharing the same characteristics (color, shape, size, materials, etc.), “has-a” relationship (“train has windows”), causal reasoning (caused by, leads to), or reasoning based on science facts (“ball and feather both float on water” or “butterfly sleeps in blades of grass”).

The game offers two levels of play. For an easier, faster game, play only with the 58 red tiles. For a longer, more challenging game, add the 30 blue tiles. Two magic wand tiles act as wild cards, becoming whatever the player names them to be when placed. The game ends when there are no more tiles to be placed and the player with the most points is the winner.