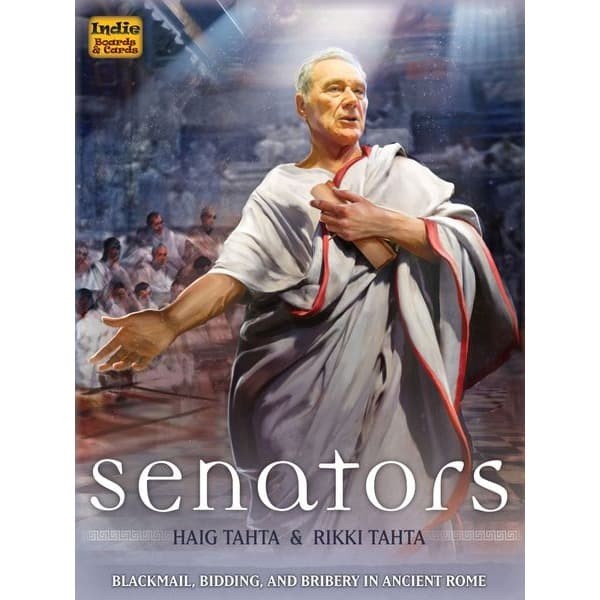 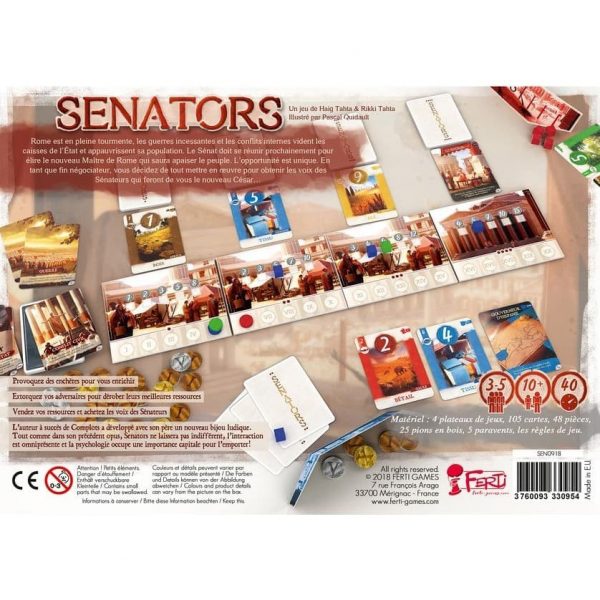 It is the late Republican period of Rome, and you are the leader of one of the factions in the city, competing for power in the Senate. You are increasing your wealth by buying up resources, then using your position to sell them to the state for fat profits. With the resulting cash, you then “buy” more Senators, controlling yet more votes in the Senate. Rome is constantly in conflict, and you know that at some point wars will increase to the point that the Senate will choose to centralize power and appoint a single leader. At that moment, the leader of the faction with the most Senators will be made Caesar.

Senators is best described as an adversarial bidding game. Players earn money by purchasing resources at auction, extorting them from other players, then selling them in sets to the bank. Cash is required to support wars, defend against aggressive bids, and most importantly to buy more Senators. The game lasts a variable number of turns, and when the fourth war is revealed it immediately ends. At that point, the player with the most Senators wins.

On their turn, a player first draws an event card from the deck, then takes one of three actions: a) launching an auction by putting new cards up for sale, b) extorting cards from other players, or c) cashing in sets of cards and buying new Senators. The game is simple, relatively short, and highly interactive. The key decisions are both tactical — how to value the cards at auction and how to bid for the wars, deficits, and other events given your relative position — and strategic: choosing which Senators to collect and how long to build sets versus when to cash in and buy Senators.