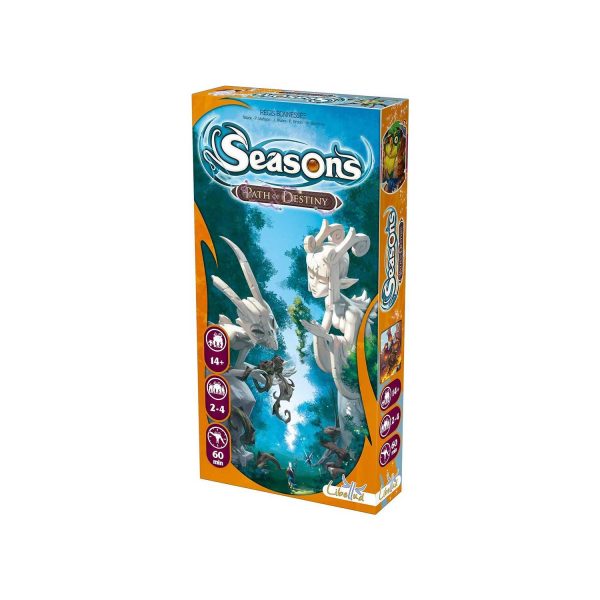 Seasons: Path of Destiny is the second expansion for the board game ‘Seasons’.

Come, Mage, and see your destiny!

Deep in the Forest of Argos, the struggle rages on between the Kingdoms most powerful sorcerers, each convinced of their glorious destiny.
Making their burning desire a reality will require bravery and determination. However, destiny is a fickle mistress…
Play with 20 new Power cards (2 copies of each card) like the dangerous Argosian Tangleweed, the powerful Chalice of Eternity or the mysterious Sepulchral am ulet!

There are new cards with abilities modifying the core of the game in interesting ways, like blocking someone else’s familiar, rerolling the die not chosen by any player or straigthening once-used card (for 1 crystal) to use it again this turn. The main power of this expansion lies in the concept of the Die of Destiny.
Once per round, a player can take a die from the menu as usual, but instead of applying its effects, roll a Die of Destiny. The bonuses from this die are generally weaker than those of seasons dice, but it gives the players certain number of destiny tokens. Whoever has most tokens by the end gets +20 prestige (in other words, whoever relied the least on the stronger, seasons dice).

This expansion is independent on the first one (Seasons: Enchanted Kingdom) and adds more variability and some new concepts to your plays.