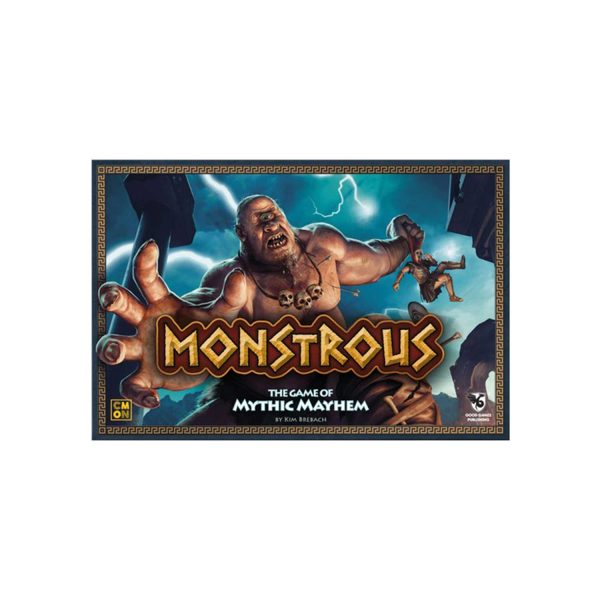 Olympus is shaking to its foundations. Faith among the mortals is waning and with it the very power of the pantheon. Zeus is in a rage: “Hear me, gods! I command you to send forth my MONSTROUS pets. Make them rain from the sky and erupt from the underworld. We will rekindle these mortals’ faith – through FEAR!”

Monstrous is a game of gods and monsters, fear and faith, dexterous skills and tactical combos.

Players are Greek gods throwing mythical monster cards from their hand onto a shared tableau of ancient Greek locations to gain as much ‘Faith’ as possible. But a strong guiding hand is not enough – cunning use of tactical monster and location powers is the key to gaining the most faith of all the gods, and the favor of Zeus.

During setup, a number of large location cards equal to the number of gods are arranged on the table – these are selected from 12 ancient Greek cities where the insolent humans cower. Locations have special powers and provide Faith when hit by Monsters. Depending on the number of gods playing, each god has a randomly constructed deck of between 7 and 10 out of 12 mythical monster cards, each with their own special power. Each god shuffles and readies these decks, then draws 3 of their monster cards ready to throw at locations and monsters already on the table.

On their turn, a god chooses a single monster from their hand, and throws it (without their hand crossing the table edge) attempting to hit:
1. a location – to use its special power, and any thrown monster power that affect locations, and gain its Faith.
2. other monster cards on the table – to use the special power of their thrown monster on the other gods? monsters.
3. ideally both at the same time!